Home Who We Are Salvation Stories Significant Resources Meet The Team The SUM Shop Lynn Donovan Ministries New Here? Video Teaching
The Kingdom of God Within Us
A Big Word for a Little Man

Keys To The Kingdom - Part I

I have a thing about keys.

Last week I believe the Lord poured out revelation upon me regarding keys and their significance in the Kingdom. I also believe that the revelation was not only specific to myself but also to others.

Way back in 2009 I penciled together an idea for a book. That book was centered on 10 keys. Winning Him Without Words, was the result and the keys became profound in my life and by default, in a lot of other lives who have read the book and will read the book. Then last year I had a dream. I rarely remember my dreams but on this particular night I dreamt that Jesus handed me three keys. I could clearly see bronze skeleton keys. It was obvious to me they were tarnished and ancient. I knew somehow they were large and weighty.

That’s all I remember about the dream. I called Dineen and told her about it and that I didn’t know the purpose of the keys. It’s one of those things that you hold in your heart, just as Mary held special thoughts about Jesus in her heart. Months passed. The picture in my mind remained of these three keys. Then one day I read a passage in Romans. This passage has nothing to do with keys or at least that’s what I thought. However, the minute I read it, I just knew. These were the keys Jesus placed in my hands.

For the kingdom of God is not eating and drinking, but righteousness and peace and joy in the Holy Spirit. —Romans 14:17

The three keys are Righteousness, Peace and Joy.

Do you know what the keys unlock?

Well, it was months later after a season of prayer asking the Lord to reveal their meaning that I came to know these specific characteristics; peace, joy, righteousness, are attributes of heaven. The atmosphere of heaven! Now, I don’t fully understand the profound significance of all this. I believe I’m still uncovering how to use the keys and learning what they unlock specifically and such. But, I am living more and more in this kind of atmosphere here on earth.

Finally, in my new book I write about the combination lock which I also shared in a post here in November. And guess what? Yes, the new book is about keys!

Yep, locks, lockers, keys, unlocking and locking are prominent in my growing faith. Finally this past week, I was out in the vineyards on my walk-n-pray and that was when the Holy Spirit downloaded the revelation. I called Dineen and practically wore her out with my excitement over this revelation. But what I forgot is the reason this revelation finally came about was because of a lock I found back in January. I shared a photo of it on Facebook that day and I shared the photo again in the SUM comments on Monday. Here it is for you to see. 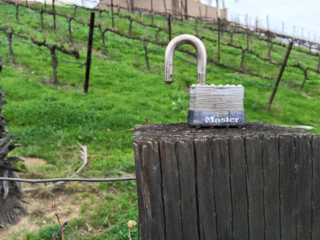 Last week as I walked along the vineyard road, the Lord revealed the meaning of the clues. And what I failed to remember was Dineen and several others found locks around the same time that I found mine. (Side note: I found this lock sitting on the fence post, unlocked. Notice it’s old and also notice the word: Master. Joanne pointed out that little bit of intrigue to me. I hadn’t noticed it said, Master. Hmmmm) Okay, onward.

At the center of Becoming Brave is the passage Matthew 16:18-19

MY FRIENDS!!!!! The implications of how all this comes together, simply freaks me out.

I came home supercharged with faith. Now let me tell you about the passage I read that morning before my walk. I’ve read the Bible through since 1999 and I haven’t remembered reading this specific passage until that morning. This passage blows my mind and was the final piece of the revelation.

Read Joshua 10:1-14 and we will pick up this story on Friday. It’s a mind-blow. And this story is for us. I will explain.

This week I want you to pray over these particular passages of scripture, Matthew 16:18-19 and Joshua 10:1-14. I’m praying along with you because I believe these passages are for us, believers right now, today. The implications are staggering and so exciting.

Leave your thoughts in the comments. See you there. Hugs, Lynn