Another Astounding Testimony: Mismatched, Addiction and Now...He's a Believer!

My friends, you just read about Janet's husband's transformation and a few of you even shared stories in the comments about your spouses coming to faith in Christ! Wow! Lynn and I—our heads are spinning and our hearts are jumping for joy!

AND, here is another one! Trish Fuhlendorf reached out to us a few weeks ago and shared a stunning video testimony done by her husband who is now a full time pastor. Once we saw it, we had to know more! Trish not only lived in a mismatched marriage for ten years, but also lived and dealt with her husband's addiction to alcohol as well.

I love what Trish shared in her email: "I have a very small local marriage ministry here in Denver, which consists of the Lord placing Christian women, who are struggling in their marriages (many who are ready to leave), whether it be because they are unequally yoked, and/or married to an addict. Been there, done that...have both t-shirts."

Today we are sharing part one of Trish's testimony. On Friday, we will have part two up along with the video testimony her husband Stu did in a message he gave at his church. My friends, don't miss a moment of this stunning testimony. We have prayed for these testimonies and now they are streaming in! To God be ALL the glory! 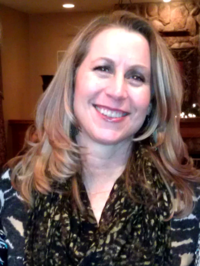 I am the youngest of six children and was raised Catholic. In a way, I am grateful for my Catholic upbringing because it did provide me with the foundation that Jesus is the Son of God. What was missing however, was the commitment to surrendering my life to Christ’s lordship. At 21, I was most definitely, lord of my life.

I met Stu May 3rd, 1986; appropriately, at a bar. We were married 11 months later as equally yoked pagans. Stu was a teacher when I met him, but decided that financially, this was not the career that would give him the life he wanted. So, we moved from Denver to San Diego so that Stu could pursue his MBA, while I worked to support us as an Aerospace engineer. It was during these two years that I was first exposed to my husband’s anger. I did not make a connection between his bursts of anger and his use of alcohol. I drank too, so his drinking was meaningless to me. I do however remember times when friends had to carry him to our car because he was so intoxicated.

After graduate school, we moved back to Colorado where Stu eventually landed his first Chief Financial Officer position at the age of 29. I gave birth to our two children and our life went on.

At about the age of 36, a friend of mine gave me a book, but said as she handed it to me, “Watch out, it will change your life!” Needless to say, I couldn’t wait to start reading it. It was “Left Behind”. About a quarter of the way into it, I realized that in the event of rapture, I would absolutely be “left behind”.

I was attending a small community church at the time and made an appointment with the Pastor to go over my laundry list of questions about Christianity. He beautifully answered all of my questions and encouraged me to attend the upcoming women’s retreat. That weekend, at the retreat, I was filled with the Holy Spirit and never looked back. This is when the fun began. Initially, I concealed my new found faith, but over time, decided that was ridiculous and I started to read my Bible openly.

“What?!? What do you mean you’re now a Christian? I thought I married a Christian!” Stu felt that since we celebrated Christmas and Easter that perhaps we were Christians.

As I grew deeper and deeper in my faith, he became angrier and angrier. Arguments were a regular occurrence and soon, we discovered that we had nothing in common.

Shortly after we married, Stu began to gain weight and over the years, ballooned to 310 lbs. His drinking was also on a steady increase. Because I didn’t have alcoholism in my family, I was not really aware of the signs. Again, since I drank, I just thought there were 2 kinds of drinkers, those that became the life of the party and those who became angry. I, unfortunately, was married to the latter.

Over time however, I noticed that the amount he consumed and the time in which he consumed it, were significantly higher than in my situation. I confronted him that he might have a drinking problem. He agreed and that began the roller coaster of trying to solve the problem.

Stu and I were now in our mid-forties. Unequally yoked, battling addiction and both miserable in our marriage. I continued to pray, attend church and do my best to be the spiritual head of our household. By this time, I had thoroughly, studied the Bible, looking for an “out clause” for my marriage. Adultery and abandonment did not apply to my situation, but I wanted out. It was at this time that the Lord showed me that my holiness was more important to Him, than my happiness. I must be a witness for the covenant of marriage. I clung to many scriptures during this time, but I think the two that had the greatest impact on me were, Acts 16:31 “Believe in the Lord Jesus, and you will be saved—you and your household.” (this was my promise) and 1 Corinthians 2:14 “The person without the Spirit does not accept the things that come from the Spirit of God but considers them foolishness, and cannot understand them because they are discerned only through the Spirit.” (This verse completely changed the way that I prayed for my unsaved husband...)

Be sure to "tune in" Friday for part two of Trish's amazing testimony and Stu's video testimony.
We love you, SUMites!
Dineen & Lynn