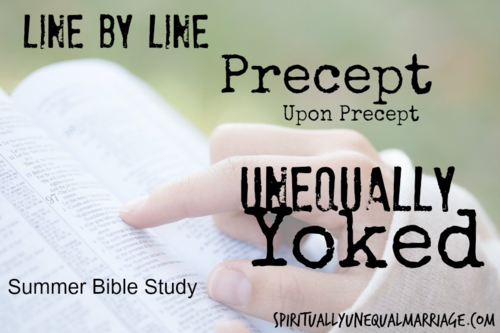 Well I’m still not up to par but we are pushing forward with this summer study. If you remember we completed the study of 1 Corinthians 7:10-12. Today let’s move forward to the subject and verses.

Verse 12: To the rest I say this (I, not the Lord): If any brother has a wife who is not a believer and she is willing to live with him, he must not divorce her.

Let’s refresh our memory here. Remember Paul is writing a reply to a letter sent by the first century Christian church in Corinth. As men and women became believers, they didn’t know if choosing faith would impact their marriages. They were seeking wisdom about how to navigate their new faith in light of marriage. In the particular passage above Paul is now speaking specifically to believers who have come to faith…. and their spouse has not.

It is interesting here that Paul offers his advice and it is not specifically a command from the Lord. Commentaries indicate this is because there wasn’t specific direction spoke by Jesus while on the earth. However, the offering by Paul is inspired by God.

Question: Because Paul changes the emphasis in this passage and denotes that this verse is not a command but Paul’s wisdom, does it change its truth or power? (Share your thoughts in the comments.)

The verse reads specific and clearly stated and is addressing men who are married and become believers and their wife remains and unbeliever. (By the way, we have many more men readers at SUM than you think. They usually just don’t leave comments *smile*)

What does Paul instruct this man? Well what I love about this passage is that Paul is instructing them to consider the unbelieving spouse. This is also in direct opposition to Old Testament practices where Jews (Believers) were instructed to “put away” their “heathen” spouses. Ezra 10:3. I love that major paradigm changes in life and society came with Jesus’ ministry.

This line of scripture directs believers to consider their spouses willingness to remain in the marriage. And if she is willing then – he must not divorce her.

Straight forward. However, we know that it’s much more complicated than this simple directive. What I find interesting is the rendering in King James:

But to the rest speak I, not the Lord: If any brother hath a wife that believeth not, and she be pleased to dwell with him, let him not put her away.

The translation is “pleased” in the KJV. Fascinating!!!!

If we look to the next verse the command from Paul is identical to a woman believer living with an unbelieving husband.

13 And if a woman has a husband who is not a believer and he is willing to live with her, she must not divorce him.

My friends, let’s place these verses in perspective. If I received a letter such as this from a newly married young woman who just found Jesus, I would encourage her just as Paul has done in his writing to the Corinthian church.

However, Paul is not addressing marriages where there is great sin and wickedness as part of the marriage. I would venture to guess that if Paul was presented with some of the scenarios that fellow SUMites have faced, his answer may have been more involved and even very different.

For today’s Line by line study let me say this:

I am living out this passage in living color. I have been living it now for the past 22 years. I’ve been married to a man who is “pleased” (most of the time, ahem *grin*) to be married to me. My faith has not caused him to want to leave. We have an ordinary and beautiful marriage. I will admit that I’ve faced seasons where I wanted so badly to be married to a believer. And I will also be completely authentic that if this command was not in God’s Word, I might have left our marriage.

However, I’m so glad I obeyed God’s Holy Word. I truly love my husband AND, the intimacy with God I’ve found came about because my husband is an unbeliever. My husband’s disregard for my faith actually pushed me to know and love Jesus more than if I had married a man of faith. I would have likely placed my faith and beliefs on the shoulders of that man…… instead of the King.

I can truly tell you I’m thankful. Thankful for this tough and at times, lonely road of the unequally yoked. It’s been difficult and challenging but also brought me into the best thing in my life. A life-transforming faith. An experience and love with God I’m still astounded by every day. And the hope of Jesus for my children and my future and for all mankind. WOW!!

Okay, thoughts today?
See you in the comments, Hugs.