Home Who We Are Salvation Stories Significant Resources Meet The Team The SUM Shop Lynn Donovan Ministries New Here? Video Teaching
Sinner vs. New Creation
The Truest Words From The Heart of Every Believer In A Spiritual Mismatched Marriage

Angel on The Roadway

Heidi Holmes has been a regular reader of SUM for about two and a half years. She made the five hour drive from Las Vegas, NV to Temecula last week to participate in our Walmart Prayer Day. Heidi told me that a year ago she was so riddled with fear and anxiety, she could have never made a trip like this alone. (I have her permission to share)

God has brought so much healing into her life.

Heidi left on Friday the day following the event and an astonishing thing occurred. Here is her story: By Heidi Holmes

Ok here goes... Driving back to Nevada the following day still drunk on Gods presence and glory that showed up in Temecula, I could do nothing but smile and praise His name, singing with each song of praise on the radio with tear-filled eyes. I was so full of gratefulness and utterly in complete love with this King who does not disappoint! The song "I Can Only Imagine" came on, only the symphony version, (I had not heard this version before). I can't begin to tell you how divinely heavenly, the sound was! My body completely overwhelmed in love and the spirits chills. I wanted that feeling to last forever.

As the song played I focused on a semi I truck in front of me, straining to see what was on the back. As I got close enough to see, I saw that it was a pair if angel wings, with the words "Angel Transportation”. I thought “Hmmm, must be the angel armies I prayed for on this trip escorting me home ;-) " . 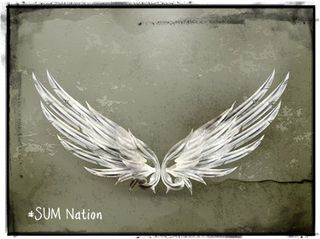 I passed the truck smiling a little thank you, not really knowing if it meant anything at the moment. I continued down the road in my drunken state of love for my Father smiling ear to ear and still tearful eyes, trying to wrap my mind around the past couple days. Three miles down the road from the truck, I see a sports car in the far left lane (3 lane freeway) hit the brakes, swerve to left side of road then over correct to right to get back on the road heading horizontally to the travel lanes.

I think to myself, “Oh no! THIS isn't good he's going WRECK!!!” But he has two lanes of traffic to pass through. I’m probably safe." However, I still fear for the driver.

Suddenly everything stopped, then started in slow motion. The car kept swerving ALL over horizontally making it between all the cars. I could even see their panicked faces. Even the all American phrase for panic "Ohhhh sh.....t" was readable from where I was. I have to admit that very phrase almost escaped my lips as the approached my lane far right of the freeway.

As they spun around in front of me 360 degrees twice, I KNEW my fate was sure, there was NO way I'd be able to avoid them at the distance and speed of 80 miles per hour I was traveling. But time slowed even more, panic vanished, calmness took over, and my truck slowed as I maneuvered in a calm matter, SO unlike me. My truck avoided their car all together!!

I had avoided the car and ended up stopped both vehicles side by side pointed down the freeway in the RIGHT direction!!!!

Are you kidding me?!!

I'm alive, they are alive, and not a scratch on either!!! I paused, made eye contact and waived a "are you ok?" wave. And then drove on because of all of the traffic behind us. I looked in my review mirror and saw the car with the two men in it had pulled of the road and parked. No doubt to give a prayer of thanks! I of course, was bawling and sobbing my thanks the rest of the way home.