Home Who We Are Salvation Stories Significant Resources Meet The Team The SUM Shop Lynn Donovan Ministries New Here? Video Teaching
The Battlefield of the Mind: Feasting on God’s Word
A Reader Question: Could I Be Unequally Yoked?

Joshua, The Wall's AND Who Is This Guy?

Let’s get back to Joshua, the Israelites, and those ever present and menacing Walls of Jericho.

I find it interesting as I began to write this series, I was also reading this very story in my Daily Bible this past couple of weeks. There is such a depth and richness in these chapters that I could probably write a book about the parallels to our life today.

But alas. I have too much to do right now. *grin*

Today I want to specifically address something that I think most of us miss in this story. But before I go there I think we need to remember that in several places in this story, the beginning chapters of the Book of Joshua, God calls the people to consecrate themselves. Before crossing the Jordan River (Joshua 3:5) and on this particular day the people witnessed a miracle. Both Dineen and I have written about this very thing. The Priests stepped into the water (faith in action) and the water piled in a heap, up-stream. They crossed the Jordan, a million plus or so, to arrive near Jericho (witnessed the miracle). Which, by the way, completely freaked out their enemies behind the walls. The Bible says: And their hearts melted and they no longer had the courage to face the Israelites (Joshua 5:1).

Again in preparation and consecration, God commands Joshua to circumcise the entire male population (Joshua 5:2).  They are set apart as Holy unto the Lord. I often wonder if we also go through a season of circumcision. The cutting away of the worldly in order for God to bring us into His Holiness and  Promised Land? Makes a girl ponder, that is for sure.

BUT today, let’s get to something very interesting that I bet most people don’t notice.

Now when Joshua was near Jericho, he looked up and saw a man standing in front of him with a drawn sword in his hand. Joshua went up to him and asked, “Are you for us or for our enemies?”

“Neither,” he replied, “but as commander of the army of the Lord I have now come.” Then Joshua fell facedown to the ground in reverence, and asked him, “What message does my Lord[e] have for his servant?”

The commander of the Lord’s army replied, “Take off your sandals, for the place where you are standing is holy.” And Joshua did so.

This is the commander of the Lord’s armies. AND this is the second time this angel came to lead the people into the Promised Land.

Exodus 23:21-23  “See, I am sending an angel ahead of you to guard you along the way and to bring you to the place I have prepared. Pay attention to him and listen to what he says. Do not rebel against him; he will not forgive your rebellion, since my Name is in him. If you listen carefully to what he says and do all that I say, I will be an enemy to your enemies and will oppose those who oppose you. My angel will go ahead of you and bring you into the land of the Amorites, Hittites, Perizzites, Canaanites, Hivites and Jebusites, and I will wipe them out.”

I have to stop and dwell on the implications. God prepared an angel at the beginning of the journey to fight for the people. To “go ahead of you” and bring the people into the Promised Land.

The people rebelled. Fear held more power over the people than their faith in God.

The angel waited 40 years to complete the assignment given by the Lord. And on the day that the people were finally ready, the angel and the armies of heaven were present and ready.

We are not that different.

I have to wonder if God sent angels years ago to help me discover my Promises. And because I wasn’t ready to believe those promises, the abundant life that was truly mine to have, the angels have been waiting, waiting, waiting. I wonder what promises were made to my relative of even a few generations ago that God made and He is still waiting to fulfil.

Right now we are in this transition season. The 40 days between Passover and Pentecost. During this season of transition I think it’s our preparation period. Our consecration. Our season to ask God to return the angels that He prepared just for us that we may enter into the battles at hand with absolute assurety that victory is ours. The captives and prisoners will be freed and that the plunder is our reward.

More than anything, I pray this post does what’s it’s designed to do. Mess up your mind and stir your soul.

Have you ever thought about the angels that have been dispatched to fight with us in spiritual warfare? Do you think you have faced the Promised Land before but were too fearful to fight for it? And what do you think or even know are promises that were given to your relatives that they did not see fulfilled in their life time that God is hoping and cheering you on to receive the glory, reward and riches He has been waiting to pour out in abundance.

Wow. This book Joshua is messing with me. I think there is so much God is desperately wanting us to pray and ask for in this season of transition.

My question: Do you have the courage to ask God for the angel armies to storm the walls?

Have a great weekend. I’m looking forward to your thoughts. I love you my friends, Lynn 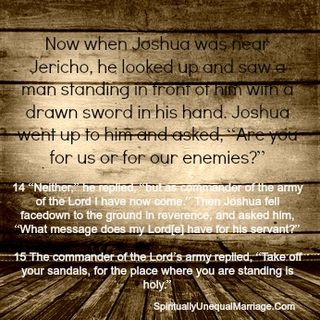 PS. Thank for your patience during our website down time. My hosting service was hacked but seems to be doing great now. I hope you had a chance to read about Gina’s miracle on Monday.