We SAW an Open Heaven! Wednesday night at registration
Most of you know that Dineen and I attended the Open Heavens Conference at Bethel Church, Redding, CA last week. This was the second year that we attended. Since so much happened to us last year I was hopeful that this year would not be a letdown.

Ahem, can you even believe I said that.. Pshaw! That I would even think God would disappoint.

This year was 100 times better. So much happened again to me and Dineen and it’s likely it will take another 365 days to process and receive all that was birthed last week.

For me personally, the conference brought me something new. I not only received but there were others whom I poured into. I prayed, God showed up with power. People were anointed. Heaven was open all week and the stories we have to share will release such a hunger in you that you will trade everything you have for more of Jesus. I promise.

I’m convinced God has now commissioned Dineen and I to release all we have on this family of SUM. I also will share with you that on Saturday I had an encounter. God cracked the Universe! For me! And what happened was so breathtaking, so spiritual that I burst into sobs. I was a beautiful train wreck.

There is pain in this story. Jesus arrives in this story and this story is about each of us who live in a difficult marriage. I hope to have processed enough to write about it on Friday. So stop back in and have Kleenex waiting. *grin*

I promise it will leave you changed!

Our friend Maria, whom I met last year at the conference only to discover she lives near me. She taught me all about the power of Luke 9:1-2. She became my mentor over the past year. Who knew God would do that through a chance encounter last year.
For now, I want to share with you some photos. I want to ask you to get an envelope out and start putting money in it for your own journey to the conference next year because we are going again.

So now for some photos and stories.

Below is a photo of a young man, Brandon, who joined us. But this is no ordinary story. His mom, my friend Sue, joined us and was planning to travel with a girlfriend to the conference. At the last minute the friend cancelled so Sue asked Brandon to take her place. There is a ton more to Brandon’s story but suffice it to say, God had Brandon on His radar months ago because Brandon needed Him.

I met Brandon at the first session and you could read plainly on his face he was uncomfortable about this whole thing. I sensed in him fear and a closed downess (does that make sense?)  Well I remember laying hands on him and praying and by the end of the three days, this young man was also a beautiful train wreck. By the way, that’s a good thing. A really good thing.

His entire countenance was changed. His fear…. GONE.. His sadness…. GONE…. His hope…. FULLY RESTORED. His purpose in life… CLEARLY EVIDENT. I looked in this young man’s face and he just….. well he just looked different. He had experienced a radical encounter with the Most High God and His Son Jesus and the Holy Spirit. He was forever changed. I saw him on Sunday morning (yesterday) and he told me he is checking into the school at Bethel. Woo Hoo!!!! God has another heart for the rest of his life and Brandon will bring thousands to Christ.

And that’s just ONE story.

The next two photos are of women who prayed over us last year. It was so special to speak to them this year and tell them about the impact of their interactions with us last year and all that came of it.

The little lady in green, well, ahem, she introduced me to Holy laughter last year. And this is Deborah. She breathed the breath of God into me and I fell to the floor as God’s power and love flooded my body. 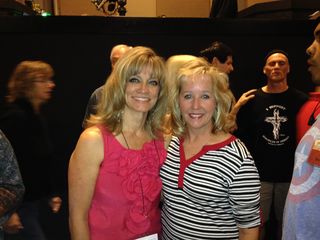 BTW, I saw Deborah the next morning and she told me she had been praying over our ministry. Wow, God is just so good.

I was so surprised at how much our words encouraged them. It was a neat blessing to speak love into them a year later.

Here we are with Bill Johnson. I spent a few minutes tell Bill about all of us and how his message on 1 Corinthians 7:12-14 literally changed my life, changed our lives. He clapped his hands, smiled broadly at Dineen and me and said, “Such great news. Such great news.” 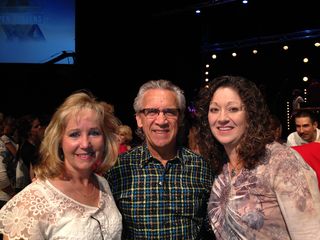 Me, Bill and Sue

This is Kris Vallatton. Dineen and I wrote an entire series here at SUM on Spiritual warfare based upon his book, Spirit Wars. How fun to share with him that we are also Regal authors. What a nice man. 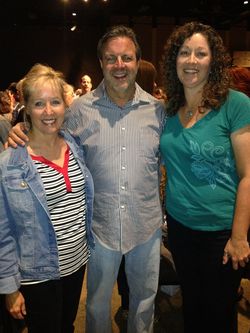 The speakers WERE OFF THE HOOK.

I know I will be finding everything written, on Youtube and Podcast by Bobby Conner. That man is truly walks with God and on top of that, he’s hilarious.

WORSHIP took us to heaven. I heard angels singing with us. The building shook and God was pleased. Just listen to this song. It was played last. When you get to the final chorus where they sing. Let His praise be glorious…. TURN IT UP LOUD..

I’m convinced that this is the Greatest out pouring of God’s spirit ever on His people. And we, The SUMites, we want all of it.

Papa, Daddy, we want more. We are hungry for you. Increase in us. We want sign, wonders, miracles and healing but more than anything, Dad, we just want you. We want all and only what you desire. In King Jesus name. Amen. 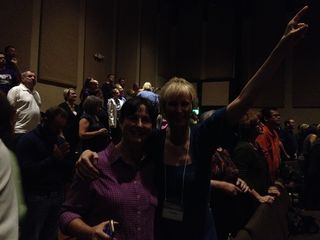 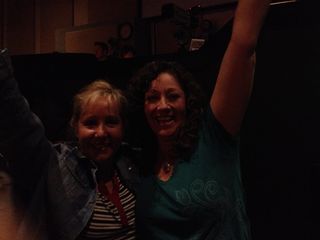 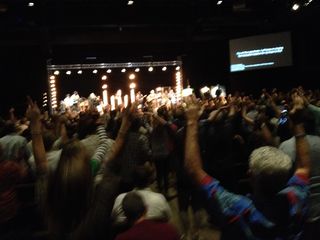 Every knee shall bow, every tongue proclaim that Jesus Christ is Lord!