This is a story I wrote in 2006, but it actually happened to me during the Summer of 2002. The reason I want to share this is because it shows how God can work in a simple activity like grocery shopping. God showed up BIG that day for me and I wasn't the only affected. God is closer than we think. We just have to look for Him.

So read my story, then sit back and think. Did God meet you at the grocery store one day? On the school yard? At work? 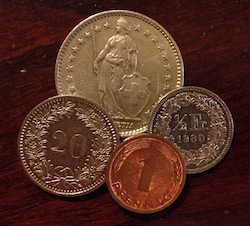 I can’t do it anymore.

This line ran through my head, over and over again as I stood in the grocery line. The thought had dominated my mind long before my two daughters and I had joined my husband in London for a week. He’d been assigned to a client there two months earlier, and now he would be required to stay longer. That meant two more months of handling things on my own, and I was already worn out.

We had moved to Switzerland three years ago and found living in a foreign country to be as much of a challenge as an adventure. The first two years alone had been a real struggle for our two daughters. Learning the language and trying to make friends in the small community we lived in had proven to be more difficult than we’d ever imagined. Just shopping for groceries turned out to be one of the biggest adjustments in my life. That and coping with the daily struggles of living in a foreign country had begun to take its toll.

Managing the house, being the main interpreter in the family, and coping with some of the stigma that came our way because we were foreigners had finally caught up with me. I couldn’t escape it. Mind overwhelmed and heart about to shrivel, I didn’t think I had anything left to offer, or the energy to even try.

I felt completely and utterly hopeless over the whole situation. I cried out to God for help with what little strength I had left. Not even a real cry for that matter. Just a simple statement.

I can’t do it anymore.

I put my groceries on the counter and waited for my total in a daze. My thoughts centered around getting home as fast as I possibly could. The cashier finished ringing up my items and told me the amount: 45.56 CHF (Swiss Franks). I ran my bankcard through the machine, but it didn’t register the magnetic strip. The cashier said to try the card again. I did but no luck. Once more. Still nothing.

Since we had just flown back from London the day before, I hadn’t gone to the bank. I only came to the store for a few things to get us by until I had the strength to do serious shopping. I can imagine the picture I made that day as I opened my wallet, hoping I had enough cash to pay for my groceries. The thought of having to put something back was more than I could handle.

As I counted out the bills I was relieved to see I had exactly 45.00 CHF. Now at least I had a chance. I dumped my wallet over into my hand to empty the change section, and the cashier held out her hand to count it for me. I think she recognized my tattered condition as a woman under stress. This, I have found, is an identity that transcends all cultures and languages.

The next moment is still clear in my mind to this day. She looked up at me with eyes bigger than the largest coin she held, and said I had the exact amount. My wallet lay empty, not a single coin remained, and the groceries were paid for. To the Swiss penny.

The next day I went to the bank to order a new bankcard. The teller took my card and ran it through the pin machine. It worked perfectly. I asked if she were sure, so she checked again. There was nothing wrong. As I left the bank, the proverbial mental light clicked on. It was no coincidence that the grocery total and the money in my wallet had matched exactly. That’s when I knew I would be okay. God had shown me I didn’t have to go it alone anymore. He had used a simple activity such as grocery shopping to remind me of what I had somehow forgotten. He’s the one in control and with me every step of the way. I simply had to quit trusting in my own ability and trust him. Where I fell short, He was exactly what I needed.

Right to the last penny.

One time God even brought me a pair of shoes the exact color I needed. These are small things but He uses them to prepare us for bigger stuff, like what Lynn and Janet shared yesterday. Like seeing a man fall to his knees in the median of a highway (read that story here). The more we trust God, the more we will see. And I love watching God at work, especially in my mismatched marriage.

How about you? What's God showing/doing in your life and marriage right now?