Home Who We Are Salvation Stories Significant Resources Meet The Team The SUM Shop Lynn Donovan Ministries New Here? Video Teaching
Weekend Devo — God Has Your Back
What Should I Do?

Shades of Grey and a Hound from Hell

I have a story to tell and I’m about to be very real. It’s a risk to share what I’m about to tell but, I absolutely know there are so many of you who will understand. I know sharing my little escapade will keep you from tripping up like I did, and I pray you will still love me in spite of my failures.

We are wrapping up our spiritual warfare series. And I know every time we write about warfare, both Dineen and I experience it first-hand. However, I also know we bring into the light the knowledge to defeat the devil and his minions. And that thrills me to the core.

The story I want to tell is strange and I hope I do a good job in the telling. I also think it’s funny in that during this series God sent a weed to Dineen to help teach her some truths. Well, you know what God sent me? 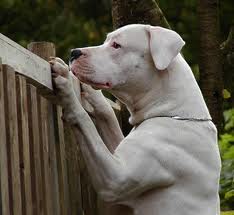 As I was relaying this story to Dineen last week she chuckled and said, “Well that fits your personality.”

We both laughed because she is right. Dineen only needed a tiny, little, ornery, weed and me…. Yep a terrifying encounter with the ugliest, scariest brown and gray pitbull.

Even worse, now I have to own up and share with you what led up to this happenstance. Through a series of events, too long to lie out here, I came to have in my possession a book that is of a certain title, that may remain Grey. Of which just further cements this story in that I’m about to discuss the gray areas of sin that we find ourselves entangled and the trash that can smell in our lives. This book has been on all the news stories and actually been the obsession of millions of American women in the last several months.

Let’s just say I felt like this book was a grey area for me until I actually started to read it. I didn’t perceive it as something forbidden in my mind. After all, I’m a married woman. I’ve likely read something like this in my prodigal wonderings. And, may I say, I’m not judging anyone because I know there are women reading this right now who have also read this book.

For me, however, in the first several chapters I knew this was going to head in a contrary direction. The changes in my thought life were evident. I put the book down. Went to bed.

Many of you know that I rise early to read my Bible, pray and then head out on an hour long walk-n-pray. I walk in an area outside of our town where there are farm animals, wild animals and all sorts of fantastic critters that God sends along my way to delight my morning. After rising the next day and thinking about this trashy book and how it has disrupted my thought life, I headed out on my walk.

Now I’ve learned to expect the unexpected. I’ve been barked at by every kind of dog, recently stared down by a coyote and have almost stepped on a snake…. twice. So now I take no chances and carry with me a four foot PVC pipe and I clip on to my belt a can of dog repellant spray although I hope I never have to use them.

On this fine morning, I began walking up a steep incline on a dirt road. My breathing intensified at my brisk pace. I’ve walked this road many times without incident. However on this morning, all hell was about to break loose. Literally.

It’s common that every property in this area has a large dog or dogs. They will run to the fence when I walk by, bark, sniff and then watch me walk on. On this day I looked to my left and there standing behind a fence was this brown –gray pitbull dog. Let me tell you I get nervous about dogs. Mainly dogs that are loose as my poor Peanut has been to the hospital several times from his unfortunate encounters with dogs on the loose.

Anyhoo, this dog is BEHIND the fence. Thank you Jesus. Whew!

I walk on. However, this is where things start to get interesting. I’m watching this dog, which has now started to bark in my direction. He remains behind the fence but is becoming excitable. Now the weird part in this entire encounter is that it took only minutes.

And God choose that moment to start talking to me. What????

Yep, I will try to recall exactly our exchange but as you might guess, I was a little stressed.

Watching the dog, he ran away from the fence that separated him and me and I continued walking up the dirt road. But, I watched the dog run to an adjacent horse paddock and with fascination and sheer dread, I watched this dog skinny under a hole in this enclosure. You couldn’t see this hole and I bet even the dog’s owners didn’t know it was there.

God spoke to me in that moment of concern, “Lynn, do you see that dog? He found a chink in the armor. He found a tiny little spot under this chain-link fence to wiggle through.”

As I was so thankful that the beast hadn’t broken through the first fence to get to me and now he was stuck in this hose enclosure, which by the way the horses were as terrified as I was. Whew! I’m still safe. But in two seconds the scoundrel ran across the enclosure and to my utter astonishment on the opposite side was another tiny hole under the fence. That round, large and now ferociously barking dog managed to skinny himself under that barrier as well.

The dog rounded the corner of the fence and was coming directly at me. There remained one last perimeter fence between me and the mutt. So far the first fence stopped him, but he ran to where he knew there was a break in the horse enclosure then skinnied under and ran to the next barrier, skinnied under that one as well. This dog is now truly working hard to get to me.

As he approached the last barrier I was a little nervous but because this was the main fence separating the property from the road, I wasn’t yet in full panic in that’s where most dogs out in this area are contained. I do know my heart was pounding likely from the brisk walking as my pace hastened to get past this dog and also from the increase in my blood pressure watching him break through barrier after barrier.

Now, please don’t be mad but this story is already over 1,100 words. I’ve likely lost a lot of you. If you made it this far, my friends, thank you. But I’ve got at least another 1,000 words to go. So on Friday, come back because the scariest part, the most amazing part and the way God moved in all of this is ABSOLUTELY worth returning for.

And I will add my heart is pounding now just thinking about it again.

It’s the gray areas, the trash we chew on, that can often do the most unexpected damage. Boy howdy, do I have a lot to say about all that. And gray areas are also extra difficult to navigate when you are in a spiritual mismatch because something might not be right for you but your spouse has no problem with it. Ahhhhh, now that’s worth talking about. See you Friday my friends.

Now walk out into your week with your offensive weapon. Do you know what that is and how to use it in everyday living? Looking forward to some great discussion today. Hugs, Lynn

P.S. Any of you who own pitbulls, none were harmed in the telling of this story. *grin*