Home Who We Are Salvation Stories Significant Resources Meet The Team The SUM Shop Lynn Donovan Ministries New Here? Video Teaching
What Really Happens When We Worship. I Promise I'm Not Weird.
Focus On The Family Broadcast

Wekend Devo — You and Who's Army? 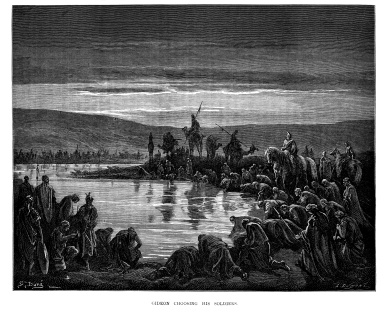 The LORD said to Gideon, “You have too many men for me to deliver Midian into their hands. In order that Israel may not boast against me that her own strength has saved her, announce now to the people, ‘Anyone who trembles with fear may turn back and leave Mount Gilead.’” So twenty-two thousand men left, while ten thousand remained.  But the LORD said to Gideon, “There are still too many men. Take them down to the water, and I will sift them for you there. If I say, ‘This one shall go with you,’ he shall go; but if I say, ‘This one shall not go with you,’ he shall not go.” So Gideon took the men down to the water. There the LORD told him, “Separate those who lap the water with their tongues like a dog from those who kneel down to drink.” Three hundred men lapped with their hands to their mouths. All the rest got down on their knees to drink. The LORD said to Gideon, “With the three hundred men that lapped I will save you and give the Midianites into your hands. Let all the other men go, each to his own place.” — Judges 7:2-7

Are you like Gideon, faced with an overwhelming challenge and dwindling strength and resources to overcome or even just deal with it?

Gideon started with an army of 30,000, yet God pared it down to 300 solely for the reason that the Israelite's victory would be clearly by God's hand and not men's. God desires to have this understanding—this trust—in our lives as well. We may look at our circumstances and see 'insufficient funds' but God purposed just the right conditions to show us his inexhaustible and ever reliable strength and presence.

With just 300 men Gideon overcame a vast army made up of several nations determined to oppress the Israelites. Correction--God overcame this menace through Gideon and his men. God could have done it on His own with little effort I dare say, but He again chose to use a mere handful of men.

It is when we have the least to work with that God accomplishes the most in and through our lives. And not only that, He gives us the opportunity to not only witness His power and strength in action. He allows us to be a part of it.

Gideon didn't start out convinced He could do any of this. In fact, in Judges 6 he asks God how He can save Israel. God simply says, "I will be with you."

God says that to us too. No matter how small our "army" (strength and resources) we have to work with and how large the "menace" (challenges and trials) we may be facing, God is with us.

God is with YOU.