Away in a Manger, Then a Tomb—The Humility of Christ 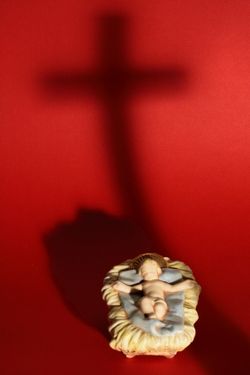 “How will this be,” Mary asked the angel, “since I am a virgin?” The angel answered, “The Holy Spirit will come on you, and the power of the Most High will overshadow you. So the holy one to be born will be called the Son of God. Even Elizabeth your relative is going to have a child in her old age, and she who was said to be unable to conceive is in her sixth month. For no word from God will ever fail.” — Luke 1:34-37 (NIV, emphasis mine)

As I read the account of Gabriel’s visit to Mary above, that last line pulled me in and kept there for a while. Here’s the mighty Gabriel telling Mary what she needs to know most of all. In the 1984 version of the NIV, that line reads, “For nothing is impossible with God.”

This is a message for us too and reminds me of the promise in Philippians 4:13: “I can do everything through him who gives me strength.”

God will never take us to a place of seeming impossibility and leave us there! He is faithful, true to His Word and will give us whatever we need to walk all the difficult paths in our lives. We don’t walk them alone. Emmanuel is with us, remember?

Now let me show you something so amazing, that one of my pastors (Thank you, Pastor Alvin!) showed us just this past Sunday. Read these two Scripture references below and let God bring a wave of fresh awe for his grand plan of salvation:

And she gave birth to her firstborn, a son. She wrapped him in cloths and placed him in a manger, because there was no room for them in the inn. — Luke 2:7 (emphasis mine)

Then he took it [Jesus’ body] down, wrapped it in linen cloth and placed it in a tomb cut in the rock, one in which no one had yet been laid. — Luke 23:53 (emphasis mine)

Jesus’ life and death are “wrapped” in the humblest of means and He willingly chose to do this for us.

Who, being in very nature God, did not consider equality with God something to be grasped, but made himself nothing, taking the very nature of a servant, being made in human likeness. And being found in appearance as a man, he humbled himself and became obedient to death—even death on a cross! — Phil. 2:6-8

Christ’s humility is the ultimate example of dying to self. He left the greatest place of power—the Son of God—and took on the greatest form of weakness—a helpless baby.

For all of us. ALL OF US! Believe God’s Word will never fail and trust Him to bring the answer to our prayers for our unsaved loved ones at just the right time.

Just as He brought his Son to Earth so long ago—at just the right time.