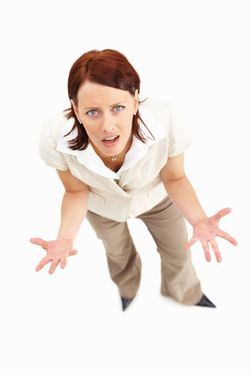 So far, we’ve been talking about our words—how we use them and even when. I have to share with you that early on in my marriage, I didn’t always use my words wisely when I did speak up, but my biggest issue was not speaking up at all.

Instead I held things in, choosing my own discomfort over dealing with a conflict or disagreement. I swallowed hurts at times that should have been expressed or shared in good ways in order to seek resolution.

If you’re a “stuffer” like me, you know what happens eventually. You blow like a volcano, spewing your resentment and anger on anyone who happens to be around. I functioned this way for many years and my family likened my outbursts to a small volcano that occasionally blew just enough to let off some steam. They even had me pegged down to how long between outbursts.

The thing is, I didn’t like being that volcano. Even in the middle of a “steam release,” I can recall asking myself, “Why am I doing this?” The lesson I painfully learned was that though we had spans of what seemed like peaceful times, the waters beneath my seemingly calm exterior were slowly reaching critical mass.

The reason I’m sharing this is to make a distinction between being a doormat and actually speaking when something needs to be said. Sometimes we’re put in a position where we do need to let our spouse know they crossed a boundary, when something they said hurt our feelings, or when something they promised they would do didn’t get done.

But it comes down to how we speak up and what our attitude is. No matter how good our marriage might be, it’s not easy living with another person on a daily basis. Roommates can be changed, marriages can’t (or shouldn’t). So how do we communicate in ways that bring understanding and edification at the same time?

Let’s look at what God has to say:

Then we will no longer be infants, tossed back and forth by the waves, and blown here and there by every wind of teaching and by the cunning and craftiness of men in their deceitful scheming. Instead, speaking the truth in love, we will in all things grow up into him who is the Head, that is, Christ. From him the whole body, joined and held together by every supporting ligament, grows and builds itself up in love, as each part does its work. — Ephesians 4:14-16 (emphasis mine)

This is a great piece of Scripture, because even though Paul is referring to spreading the Good News, it’s a model for all communication. When our motivation and attitude stem from a desire to speak truth in order to bring understanding and peace, when we speak from a place of concern not only for ourselves but for the other person as well, we’ve shifted from a place of blame to partnership.

In marriage this is critical. It’s what I call a “we mentality.” As opposed to an “I mentality,” where we wind up speaking out of anger and resentment.

Let’s look at another great peace of Scripture:

Let your conversation be always full of grace, seasoned with salt, so that you may know how to answer everyone. — Colossians 4:6

Again, Paul is referring to how the disciples were to speak to “outsiders,” how they were to witness to unbelievers.

My friends, may I propose that we are in that same place? We have an “outsider” in our very homes on a daily basis. How much more critical is it that we speak words full of grace and seasoned with salt?

Yes, sometimes it is best to not speak but other times, we need to in order to help our spouse grow and learn. Just as we need to. This is part of the function of marriage, as iron sharpens iron, we are helping each other to grow into better people. Marriage is teamwork.

This does not mean keeping our mouths shut and not speaking up when a boundary has been crossed, nor does it mean we are in a place to become critical and confrontational. It means we consider our words and motivations, then pray before speaking.

There are still times that I have to remind myself that I need to say something. No more stuffing! And there are times that as the words are coming across my lips, that I literally rephrase because I realize my words convey an “I” mentality instead of a “we.”

We are not perfect. Neither is our spouse. But as Paul says in Ephesians 4, “speaking the truth in love, we will in all things grow up into him who is the Head, that is, Christ.” In all things, I want to grow up to be like Christ. How about you?