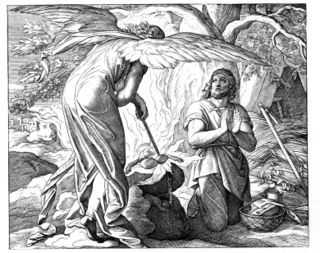 When the angel of the LORD appeared to Gideon, he said, “The LORD is with you, mighty warrior.” — Judges 6:12

The story of Gideon is a tale of man who sees himself and his tribe as being weak and most incapable of defeating their enemy. He’s baffled that God would even consider him suitable material to defeat the Midianites, who had severely oppressed the Israelites for seven years.

Yet there sat this angel of God under a tree, calling Gideon a “mighty warrior” before he even stepped foot into battle.

You see, in Gideon’s eyes he hadn’t yet proved himself. He had no credentials to qualify him for the title of “warrior.” Maybe he even thought God had the wrong guy.

The LORD turned to him and said, “Go in the strength you have and save Israel out of Midian’s hand. Am I not sending you?”

“But Lord,” Gideon asked, “how can I save Israel? My clan is the weakest in Manasseh, and I am the least in my family.”

The LORD answered, “I will be with you, and you will strike down all the Midianites together.”
— Judges 6: 14-16

God calls Gideon to go in the strength that he has. He’s not asking Gideon to prove himself first, or to get in shape, bulk up and earn the title of warrior. Nope, He just tells Gideon He’s sending him.

I love that part. God just simply says, “Am I not sending you?” It’s like God is saying, “Isn’t it enough that the Creator of the universe, who controls all things and all outcomes is sending you? What, do you think I’d send you in only to lose?”

Yet Gideon still questions. God makes it even clearer by saying He will be with Gideon and that the battle will be theirs.

But let’s go back to that first verse. Right from the start, God calls Gideon a mighty warrior. What Gideon couldn’t see within himself without proof, God clearly saw as potential. He created Gideon, so He knew what the man was capable.

God does the same with us. He knows his creations well and knows our needs to fulfill whatever place or calling He has in mind for us.

When we relinquish control of our limited and earthly perceptions of ourselves, we step into God’s potential for us. What His amazing and unlimited will is for our lives.

Now we sometimes might view God’s will for our lives as a limitation of what we get to do on this earth until we reach heaven. The truth is, it’s our own wills that are limiting and short-sighted.

God’s will is freeing, unlimted in potential and the most satisfying purpose-filled way of living that exceeds anything I can even imagine. The trick is to believe it—to move past the Gideon’s within us and trust that God is with us in whatever He’s asking us to do.

After a bit of testing and doubting, Gideon defeated the Midianites. He finally saw it wasn’t his own ability he needed to rely on but on God Himself.