Politics is the New Bullying

Politics is the new Bullying

Last week our country suffered under full assault from the mudslinging, contentious and outright mean barrage of campaign commercials. As I watched with repulse on one specific evening I felt a smack in the face with a blaringly obvious irony. Let me explain.

A week, prior to the election, I planted myself on the couch to watch a national news broadcast. At the top of the broadcast, the main stories were ticked off as a teaser. On this particular evening, the first story slated intended to detail the nastiness of the political campaigns and the commercials that stream, non-stop, during the two weeks leading to the election. A few other stories were touted and then the end of the broadcast would be specifically dedicated to the story of our nation’s growing problem of bullying in our public schools.

I watched the broadcast unfold and could only think to myself, “Am I the only one that sees the irony here?”

California was ground zero for some of the worst campaign vilification in the nation. The media flashed these “attack ads” (their label not mine) displaying political candidates spewing slanderous words about their opponent. All the talking heads fed off the negativity and the entire two weeks felt like soul torture. 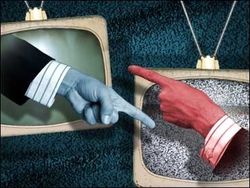 Well on this particular newscast, I watched this top story of attack ads and then a few Viagra commercials. Finally, the story arrived at the end of the broadcast of epidemic badgering and bullying on school campuses. Children taunting other kids at school with hateful, hurtful words that then left the campus and continued their hatefulness using email and the ever-dangerous texting. Almost all school-aged kids have either been a bully or have been the recipient of a bullying or have been party to both.

I have a teenager so I know just how destructive bullying is to the young psyche. For crying out loud, harsh words also hurt grownups. So as I watched the stories on this particular night my mind screamed:

Our children are learning bullying from the adults.

The pundits appear baffled by the increase in the severity and the frequency of childhood bullying in our nation. But, HELLO. They are watching it 24/7 in their very own home. And it’s the adults who are the perpetrators. Television and video games glamorize adult bad behavior and it just seemed to me as I watched the broadcast this night that the political ads are the pinnacle of public bullying. Our children are not only barraged by the media, they also are likely to experience it at home with their siblings and even their parents.

So what can we learn and teach our children from this irony.

1) We as adults must set the example. We can’t change the news but we can TURN IT OFF. I will share with you that in the past I was a news program junkie. I think I watched about three to four hours of news programing a day. TOXIC. I look back at that period and realize I was pouring lethal trash into my soul. Garbage instead of what was noble, pure, praiseworthy (Philippians 4:8) What lesson do you think your child would receive if you jumped off the couch, switched of the TV and said, “That is garbage and I won’t watch it.” Lead by example…. Not by words.

2) Find the remote and keep it close in hand. Mute, fast-forward and ignore the trash.

3) Take advantage of the “teachable moments” the election brings. Your kids will be voters soon. Teach them how to discover the truth. Show them how to select a candidate. Instruct them on what you look for and why you vote.

4) Vote. I will let you in on a little joke around our neighborhood. A few years ago while at a BBQ someone asked my husband and I, “So, do your votes cancel each other out?” I replied without hesitation, “You bet they do.” I said it proudly. Living in California, my Biblical views aren’t always popular but I vote for what I believe. I’m part of the process and my vote matters even if it’s only an example to my daughter.

5) Grasp every opportunity you have to praise your kids when they choose to be kind. Also, share with them stories and observations you have made where other kids were hurt by words and what likely happened to that child’s heart. Ask them how they would feel.

So much ugliness can transpire in a campaign season. Our nation divides and the enemy gloats. However, we need to remind our kids and ourselves that the important virtues in life are love, joy, peace, kindness, goodness, faithfulness, gentleness, self-control. These are the character traits that, in the end, people admire and will eventually win others over. And more importantly, they are qualities which are pleasing to God.