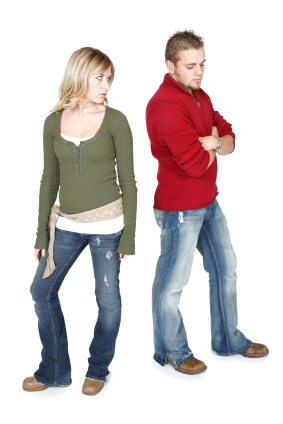 In his book Blink, Malcolm Gladwell uses many examples of the ways we make split decisions. Early on in the book he makes reference to Dr. John Gottman’s “Four Horsemen:” defensiveness, stonewalling, criticism, and contempt. Gottman says the most important of these and the most destructive is contempt.

As a writer, I’m very much aware of people’s body language. When I write fiction, I like to use these aspects of our communication to bring across a character’s emotional state. Body language says a lot. Most interestingly, I had a chance recently to observe both of these aspects right in a grocery store and the subject of my observation was a married couple.

I walked down an aisle in search of my favorite cereal and passed a couple with a young child in the front of their shopping cart. At first I didn’t pay much attention, but what caught my notice first was the tone in which the wife was speaking to her husband.

Though I couldn’t tell you the subject of their conversation, I cued in quickly on the contempt that defined her tone of communication. We’ve talked a lot here about how important respect is in relationship and another word for contempt is disrespect.

I will tell you I was surprised at the level that I witnessed. I lingered in the aisle, curious to observe this couple for just a moment longer. When I glanced at the husband, I immediately noticed he stood with his hands in his pockets, back slumped and his head down. He didn’t say much either. Often he wasn’t able to because the wife was quick to counter his answer. Again, with contempt.

Sadly, I can say this was me in the early years of my marriage. And I will share that it takes a lot of time to rebuild a relationship from this point and allow the husband to trust his place in the marriage. What I have now is a marriage that is growing and flourishing, a true partnership. Not one trying to impose over the other.

The heart of this attitude is pride I think. That may sting to hear, but I do think it comes from a place where we think we are better than another person. And we know that’s not biblical.

For by the grace given me I say to every one of you: Do not think of yourself more highly than you ought, but rather think of yourself with sober judgment, in accordance with the measure of faith God has given you. — Romans 12:3

None of us receive God’s contempt but his grace instead. Truly something to think about.