Is Divorce Really the Answer? 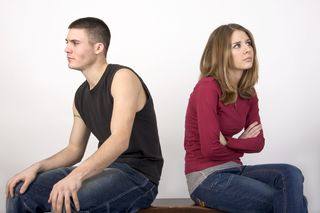 “No sooner does a couple say, “I do,” than the Serpent rears his ugly head and sets out to destroy that marriage. He knows every divorce is an attack on the character of God and on the earthly picture of divine redemption. Before the wedding reception is over, Satan is looking for opportunities to plant seeds of deception in the hearts of the newlyweds.” —Nancy Leigh DeMoss, Lies Women Believe (p. 156)

That’s a sobering statement, isn’t it? We’ve been doing a lot of chatting on the 1Peter3Living loop on the aspects of spiritual warfare specifically in a spiritually mismatched marriage. As Nancy Leigh DeMoss says, marriage is under constant attack. I believe it’s even more so in a spiritual mismatch because we are a constant godly influence to an unbeliever.

This specific chapter that I’m quoting from Lies Women Believe is the chapter about divorce. Specifically how sometimes we are deceived into believing our situation is hopeless and divorce is the best solution.

DeMoss gives a very realistic picture of the progression of lies and deceptions cleverly placed in our paths of marriage that strategically conquer and destroy (sound familiar) our marriages.

Look at these examples she gives:

She goes on to say, “To nurse the offense, rather than choosing to forgive and release it, is to become vulnerable to deception that grows bigger and stronger with the passing of time.”

See how it progresses? Barring any situations of abuse or addiction, the wife in this scenario has totally convinced herself her husband is the problem, and her focus is completely on herself—her happiness and her hurts. She’s decided the situation (the marriage) is hopeless.

But we know better, don’t we? What situation is hopeless in God’s eyes? We serve a huge God who can do anything, including save a seemingly hopeless marriage.

Over at our Facebook page, I’ve invited people to share their testimonies on how God has worked or is working in their marriages. I hope you’ll go read some of those testimonies. They’re awesome. Or feel free to leave yours here in the comments.

And if you’re in this place of hopelessness, please let us know how we can pray for you. Then come back next week as I continue sharing some wonderful truths to counter these lies the enemy has deceived us all with. We can fight and win this battle because our God is bigger, greater, and stronger than any lie the enemy thinks he can use to deceive us.

*Excerpts taken from Lies Women Believe and the Truths That Set Them Free by Nancy Leigh DeMoss, pages 156-158.