Spiritual warfare is a major issue in spiritually mismatched marriages. I loved this message from James MacDonald at Walk in the Word. I hope it ministers to you as much as it did to me. Great reminders here that our God is bigger than anything we face!
Praying and believing,
Dineen 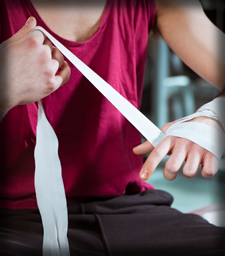 The Lord is faithful. He will establish you and guard you against the evil one. — 2 Thessalonians 3:3

Military strategists will tell you that learning the truth about your enemy is a critical factor in winning battles. As followers of Christ, we have an enemy that seeks to destroy us, but let's add some ammunition to our spiritual warfare arsenal by blowing up some of Satan's most calculated lies about himself.

#1 Satan has limitations. Don't think that the enemy of our souls can get access to you anytime he wants or do anything he feels like doing. The Bible teaches that God has put limits on the enemy.

In my small group we've been memorizing the great promise in 1 Corinthians 10:13: "No temptation has overtaken you that is not common to man. God is faithful, and he will not let you be tempted beyond your ability." When the enemy whispers in your ear, "Give in - you can't win." Say back to him, "That is a lie." (Remember "Liar" is another of his names.) God says there's nothing that you will face that you can't have victory over. He won't allow it. He will allow you to be tempted only to the point where you can win. God allows the struggle to go on so that you can draw down upon His strength and live in victory.

#3 Satan is the defeated enemy. Revelation 20 makes very clear Satan's ultimate end in the lake of fire. Satan has already lost the fight - it's just a matter of time. At the Cross Jesus took the fire out of Satan's battle plans. Colossians 2:15 says that God "disarmed the rulers and authorities and put them to open shame, by triumphing over them in [Christ]." I love that! Satan must have thought, "If I get Him up on the cross, it's over." But wait a second - He's alive again! The greatest victory of all time is the resurrection of Jesus Christ. His victory guarantees our victory in the spiritual war of the ages.