Chronicles with a Twist - American Idol

Wednesday morning, I hit the play button on the answering machine upon arriving home from dropping my daughter at school. “Call me… Call me… As soon as you can…. Call me!” Okay? Call me.”

My next door neighbor picks up, “Get dressed. Let’s go to the American Idol Finale. I have tickets.”

“I just received my tickets online. We have to be ready in less than an hour and get to Los Angeles.”

That started my most unusual day! And what a day it was.

Most of you know that I am not a fan of Hollywood. But I like the show. There is something about a rags to riches story. Reminds me of my own journey with God.

Anyhoo, My friend Lynley, her two kids and I hit the southern California Freeways. We traversed to LA by-passing a car fire- typical when you are in a hurry, sheesh! We sped down the carpool lanes to arrive at the Nokia Theater at 11:30 am. Lynley said, “The earlier you arrive, better the seats.”

We drove around the corner and the scary line began. Hundreds of people wearing black, dressy clothes. The dress code is strict – evening wear- as if attending an upscale dinner party. Here is a picture of the line that stretched out in front of us… 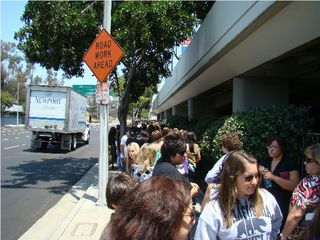 And then behind us. 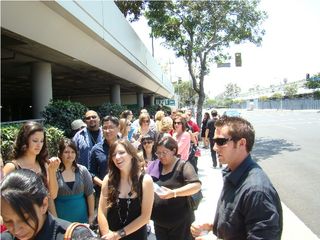 This is Lynley, her kids and me as we waited. 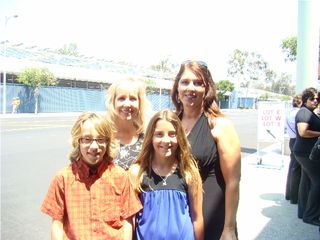 Admittance also requires a search. No cameras (that bugged me) no cell phones (no texting). So I left my camera in the car along with the cell. I was only able to snap off a few photos. 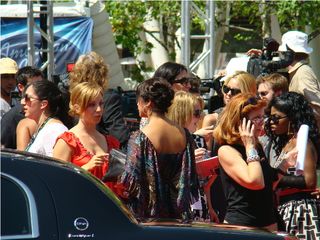 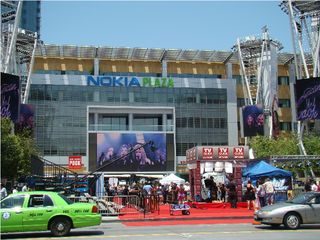 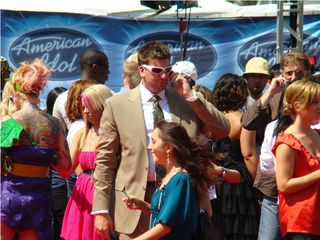 I am not a fan of Hollywood. Most of you know this. But, perhaps I am destine to be part of this weird and scary world. My daughter is bent on becoming an actress. In fact, I am taking her to an open call audition for the movie Eclipse soon. (don’t send hate mail if you don’t like this movie *grin*)

My daughter said, “Mom, there has to be a few Christians who work in this business.”

She is right and so Wednesday I screamed my head off for Kris Allen and I am a big fan of Danny Gokey. Christian bruthas!

We had great seats, Orchestra – center. They were going for $1,000 each on eBay that day. Who knew! I learned a lot while waiting in line. 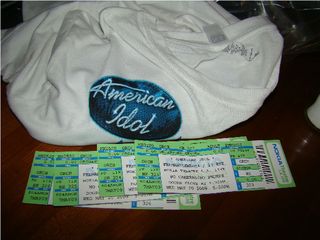 Walking into the theater for the first time was surreal. In fact, from that moment on…. SURREAL!

The sound quality of the music can’t be described. It is so very different than what you hear through the television. The lighting, pyrotechnics, the film crews and the set direction. Fantastic! I sat mesmerized not only by the show but by the stuff that happens in the two minutes and 30 seconds of commercial breaks.

Some of my favorite moments:

Watching one of the stars from iCarly, Jennette McCurdy, stop and sign autographs for the kids while walking to her seat.

I am also not star struck by any means but there were stars… All over the place. It was fun to guess who was who.

Blackeyed Eyed Peas – all I can say is… freaky!

Watching the top 13 sing together was great.

Watching them sing along with the stars, awesome. Each time during a commercial break the set crew would move a new band into place and Lynley would look at me and say, “Shut-up!”

We had a blast. A once in a life time experience to be sure.

And for me…. For you, for me….. The very best moment was when Kris pulled his wife into his arms and wept. This young couple held each other and although the camera cut away early, what we saw was a man and his young wife, who turned their heads away from the camera, cheek-to-cheek, and cried together for a long while.

I will be praying for them! 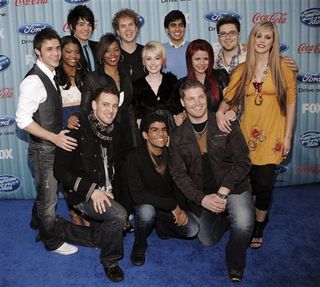 What a blast. I will never forget it. Thank you my friend, Lynley. I can’t begin to repay this adventure. I can only be thankful. Be blessed, Lynn 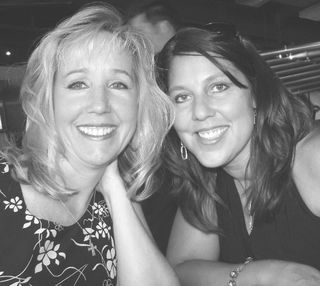 PS. I will be posting my journey story next week and we will also continue our series then. Have a fantastic weekend.