Home Who We Are Salvation Stories Significant Resources Meet The Team The SUM Shop Lynn Donovan Ministries New Here? Video Teaching
Think About It
The Chronicles of the Donovan Clan

Hot Salsa and Scripture! What a Hoot! 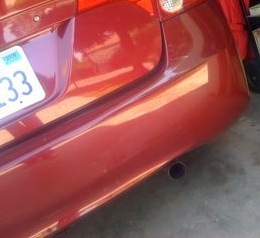 Last Friday as I was driving home with my daughter in typical California rush hour traffic, I got rear-ended. Again.

Two years ago we traded in my gas guzzling car for a nice, shiny red Honda Civic. I picked up my daughter from school one day and got rear-ended by the poor 17-year-old in the SUV behind me. I say poor because I totally lost my cool, hopped out, and started ranting how the car was only a week old. Brand spanking new.

I was not at my best that day. I apologized to this poor kid who felt so horrible for hitting us, and I could tell he felt his world had just crumbled into total darkness. I later found out that was because he wasn’t supposed to drive his car to school.

Uh oh. We both learned big lessons that day. I asked God to help me keep my cool if I was ever in the same situation again.

Well, last Friday, as I said, I got rear-ended. Amazingly, I stayed completely calm, got out of my car, and checked out the damage. A nice dent the size of a basketball waved hello along with his entourage of scratches in the nice shiny red paint.

And the last two years were so peaceful and damage free. The guy behind me suggested we move out of traffic. I paused for a mere second. Long enough for the thought that he might take off to present itself to my brain and my heart to say, “Let’s give him the benefit of the doubt.”

Sigh. Why didn’t I at least use my cell phone to take a picture of my bumper and one of his license plate, which I didn’t even take time to notice? (In CA we have both front and back plates).

Well, you guessed it. I drove ahead a bit and found a church parking lot to pull into. He kept going, never to be seen again. Boy, did I feel stupid, but I did learn another lesson and will know how to handle it the next time it happens, which it most likely will.

After spending the next few hours beating myself up for being so gullible and feeling rather stupid, it suddenly dawned on me that I never lost my cool. When the guy hit me, I remained calm and polite (though I sure would like to give him a piece of my mind now).

God had certainly answered my prayer from two years ago. And the reward in this (yes, there really is one) is that the dent in my bumper popped out by the time I got home. Only the cover was damaged with some scrapes.

Life will inevitably throw us these curves, but knowing God sees (yes, whoever you are, God saw and will deal with you at some later date for your deceit) and equips us to handle these surprise situations.

I may have left the scene of the accident with a dent, but I landed on my feet mostly undamaged and a lesson learned. But most of all, my prize is knowing God was at that intersection before me, ready to answer a two-year-old prayer.

And that’s the best kind of accident insurance anyone could have.