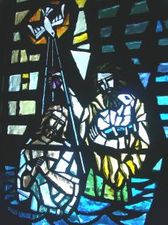 The next day John saw Jesus coming toward him and said, "Look, the Lamb of God, who takes away the sin of the world! This is the one I meant when I said, 'A man who comes after me has surpassed me because he was before me.' I myself did not know him, but the reason I came baptizing with water was that he might be revealed to Israel." John 1:29-31 (NIV)

The next day John was there again with two of his disciples. When he saw Jesus passing by, he said, "Look, the Lamb of God!"

When the two disciples heard him say this, they followed Jesus. Turning around, Jesus saw them following and asked, "What do you want?"

They said, "Rabbi" (which means Teacher), "where are you staying?"

So they went and saw where he was staying, and spent that day with him. It was about the tenth hour.

Andrew, Simon Peter's brother, was one of the two who heard what John had said and who had followed Jesus. The first thing Andrew did was to find his brother Simon and tell him, "We have found the Messiah" (that is, the Christ). And he brought him to Jesus.

Several of you let me know that Sunday’s post really challenged you. I think that’s what God had in mind, because like you, it truly challenged me. Yet I find John is still walking around in my head, as if his story still needs to be told. Or perhaps the writer in me is just trying to understand a character not well defined in the Bible.

What struck me from the above verses was how the two disciples following John left him and followed Jesus. One of whom was Peter, the one who Jesus planned to build his church upon. Again the picture shows John’s mission of preparing things for Jesus. He enlisted these two men for the Messiah’s cause and then released them to the Lord he’d faithfully served.

But did he wonder? Did he watch these two men go with Jesus and long to go with them? Did he wonder why he wasn’t destined to be one of the twelve—a confidant and friend to the long awaited One?

After all, he’d spent his whole life preparing for this time, didn’t he? At least as far as what we’re told in the Bible, his life course was set from the womb. And as we know from God’s Word in Psalm 139, even before that.

We could argue that John didn’t wish or long to be a part of this select group, because his calling was as necessary as the disciples. He had his place, his roll to play in a most important story. But I can’t help thinking that some small and very human part of him wanted to be included, to be like the rest. To fit into this elite crowd, instead of walking a seemingly lonely path to his death.

How often have we found ourselves in this very same position? Wishing we were some place else. Comparing our position with others and longing for the same circumstances. Watching couples at church, and aching to know, even just for a moment, what it feels like to have your spouse at your side, worshipping the one true God. Longing to know what it’s like to pray with your spouse over the issues you’re both facing together. Desperate for your children to see you both united by a common faith.

Maybe John did feel left out at times and maybe he did wish he could be one of the disciples instead of missing all the action with Jesus while he sat in a prison. But he must have overcome these feelings and doubts, because even when it meant risking everything, he did what he’d been sent to do. He spoke the truth and stayed his course.

The path of the unequally yoked is one of the hardest I’ve ever had to walk and am still walking. It’s easy to get lost in wishes, wonderments and longings, and miss the big picture. John may not have had the glory of the twelve, but he proved himself faithful and never wavered in his service. He may have had doubts, but he didn’t run away or give up.

Perhaps his resolve and strength came from having the Holy Spirit. John wasn’t set on his mission and left to flounder, just as we aren’t either. Jesus sent reassurance to John, letting him know his cause was just and complete. And he praised John for what he’d done.

And in those glimpses I catch the reality of John. He didn’t come to serve men but to serve Christ. In the end, it didn’t matter how he fit in or what he did or didn’t have. He fulfilled his calling to prepare the way for Jesus. As simple as that.

John kept his eyes on Jesus. He knew it wasn’t about him but about the mighty God he served. And that’s where I find inspiration. John’s story wasn’t about him, it was about Jesus.

And preparing the way.