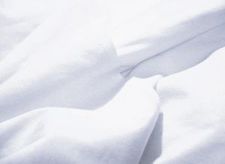 In Jeremiah 13, God tells Jeremiah to purchase a linen belt and tie it around his waist. Jeremiah does as God instructs him. Then God speaks a second time, telling Jeremiah to bury the belt in a crevice. Many days later, Jeremiah unearths the belt at God’s direction and finds it ruined and completely useless. God uses this picture literally to show Jeremiah what Judah and Israel have become in their idolatry—“useless.”

As I read this chapter, I had to pause, and take note. (That’s usually the Holy Spirit saying, “Whoa, stop and pay attention!) Throughout the Bible, we usually see linen used in association with Christ and his priesthood, going all the way back to Exodus and Aaron. Revelations 19:8 says that “fine linen stands for the righteous acts of the saints.”

Isn’t it so like God to use a metaphor to reflect his meaning on so many levels? Judah and Israel had lost their righteousness because of their pride, wickedness, and stubbornness. They became as broken and tattered as that linen belt.

God further expounds upon the meaning of the belt in verse 11:

See how the past tense is used when God says He “bound” the whole house of Israel and the whole house of Judah? God already tied that belt, binding the two houses to him. Then at the end, He switches to present tense, “But they have not listened to me.” Judah and Israel’s unrighteousness had disintegrated the belt binding them to God.

I asked God to connect the dots further for me. How did this relate to being unequally yoked? He gave me a picture of how the believing spouse can be that linen belt, a representation of righteousness (God’s, not ours), binding the marriage to God. Yet if we hide our faith, the belt disintegrates and becomes useless.

Now I’m not saying we should beat our spouses over the head with Scripture or get preachy. Remember, the reference in Revelations referred to the “righteous acts.” I believe this described who they had become through the changing power of Christ. They simply lived as Christ called them to, letting their light shine before men.

If you’re like me, you’ve learned that pushing the gospel on someone unwilling to hear it is ineffective, but nothing stops us from being a living representation of Christ in our homes each and every day. That doesn’t mean perfection. It means authenticity. What greater witness is there than a life changed?

And how is that most effective? Not by words but by acts!

Dear ones, we are called to be that linen belt in our day-to-day lives, but burying it will only make us useless. We may not have the freedom of voice to speak in our homes, but we can live boldly as a saint through our actions, through the peace of knowing Christ suffers with us, and through the knowledge that God wants our loved one to know his Son even more than we do.

And we can be that fine linen belt, unbroken and unblemished, strengthened and purified by the very God we love. And by the great intercession of our Savior, Jesus.